How does the GPS work? Learn more about Global Navigation Satellite Systems (GNSS) and their operational principles.

Track the GPS satellites that are flying above your satellite simulator. 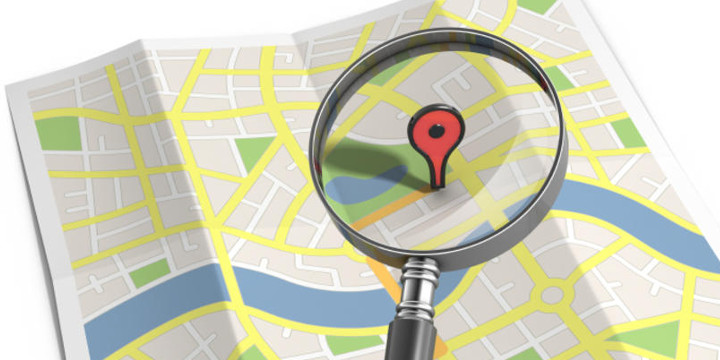 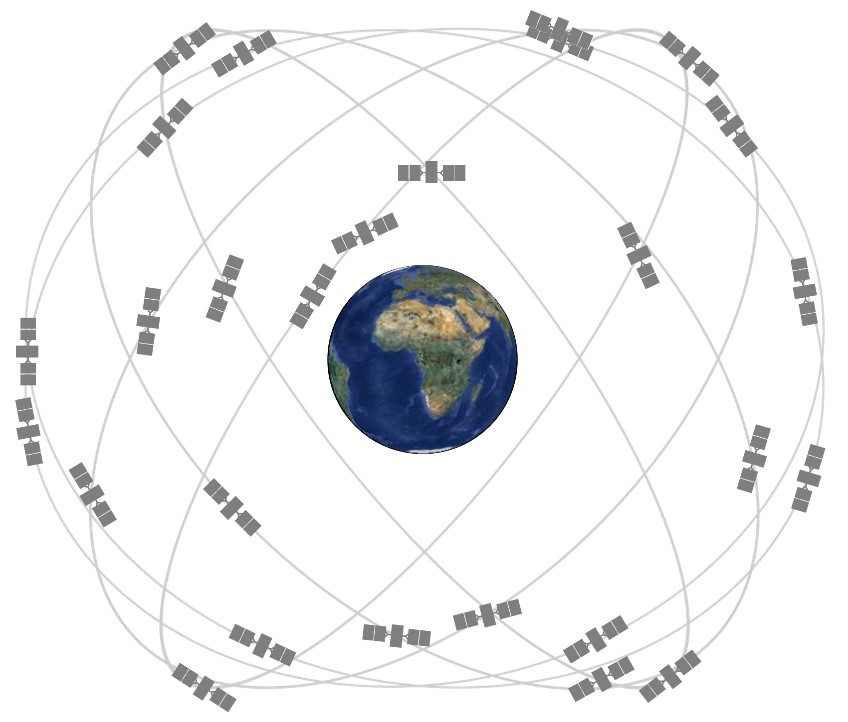 Although GPS is the most popular global navigation satellite system, there are other systems developed by other nations as mentioned before. For example, the GLONASS from Russia, the BeiDou from China, and the recently developed Galileo from the European Union. Galileo has the potential to offer position accuracy of a few centimeters! All these constellations have dozens of satellites in Medium Earth Orbit (MEO) at about 20 000 kilometers of altitude.

In Galileo, each satellite has a passive hydrogen maser clock. This is an atomic clock which uses the ultra-stable 1.4 GHz transition in a hydrogen atom to measure time to within 0.45 nanoseconds over 12 hours.

Gravity curves space and time according to Einstein's general relativity theory. This translates into having a GPS satellite clock advancing faster than a clock on the ground by about 38 microseconds per day. If these effects were not properly taken into account during development, a navigational fix based on the GPS constellation would be wrong just after 2 minutes.

In 2014, two Galileo satellites were inserted in wrong orbits. Unfortunately, this mistake made them inoperable as part of the Galileo satellite constellation and therefore they were repurposed to test Einstein’s General Relativity theory with higher accuracy. Scientists turned a mission failure into an opportunity for further scientific experimentation.


Celestial bodies have been mapped and tracked for many thousands of years. The Horizontal Coordinate System is a celestial coordinate system were an observer on Earth can track an object flying in space using only two coordinates: Azimuth, and Elevation (sometimes named Altitude like in the image below). [1] 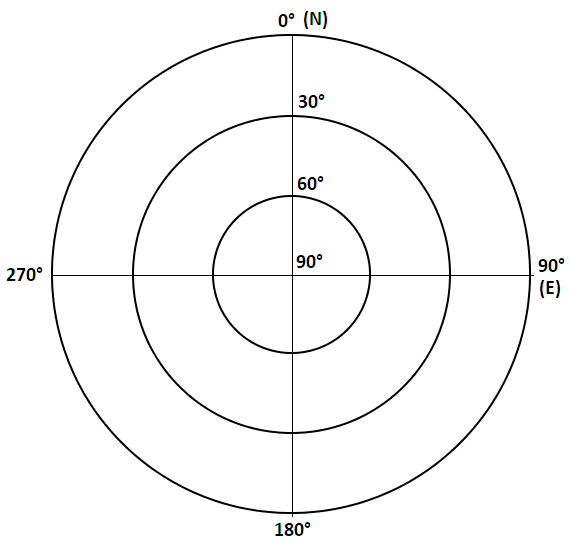 The Elevation (altitude) is the angle between the satellite and the observer's local horizon so, for example, a satellite flying perfectly above the observer will be at 90 degrees elevation and it would be represented in the center of the plot. The Azimuth is the angle of the object around the horizon, which is measured from the north increasing towards the east.

Let's track the GPS constellation around our satellite!

1. Open the AstroMissions App and go to the “Satellite Simulator” tab. Press “Launch!”:


2. Press the “GPS Tracker” instrument in order to start it: 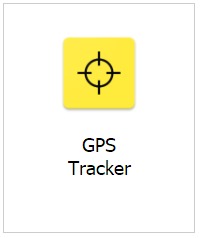 The “GPS Tracker” instrument will initialize. The “Console View” will be presented during initialization and it will switch automatically to the “Services View” after initialization.


Interesting fact: All GPS terminals used by civilians have something called the COCOM limits which prevent GPS receivers from being used at an altitude above 18 kilometers or at a speed above 1000 knots. These limits were set in place to prevent its use in ballistic missiles without having a special permission. This means that in order to use a GPS unit in space (for example by other satellites), it is necessary a special GPS receiver without these limits.

Fortunately, the GPS unit in our satellite simulator does not have the COCOM limits. This means that we can use it operationally in space where the satellite travels at high velocity.


3. Go to the Parameters Dashboard: 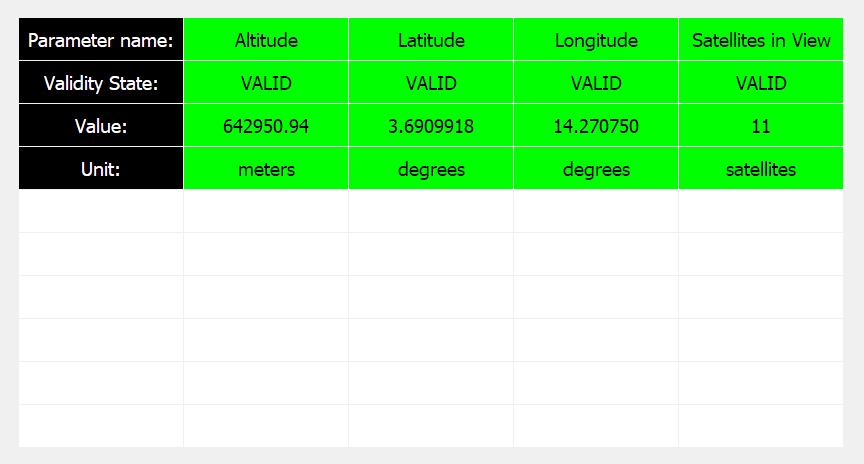 We can visualize the parameters available on the GPS Tracker instrument. These are also available directly on the Satellite Simulator parameters list. The parameters will switch color every time a new parameter value is received. The corresponding value of the parameter is on the “Value” field. For example, in the picture above, the altitude is of 660’670 meters or about 660 kilometers.


4. Scroll down to the end of the GPS Tracker instrument panel and on the bottom, you will find two buttons. Click on the “View Satellite Controller” and then on the “Switch to: Advanced Mode”: 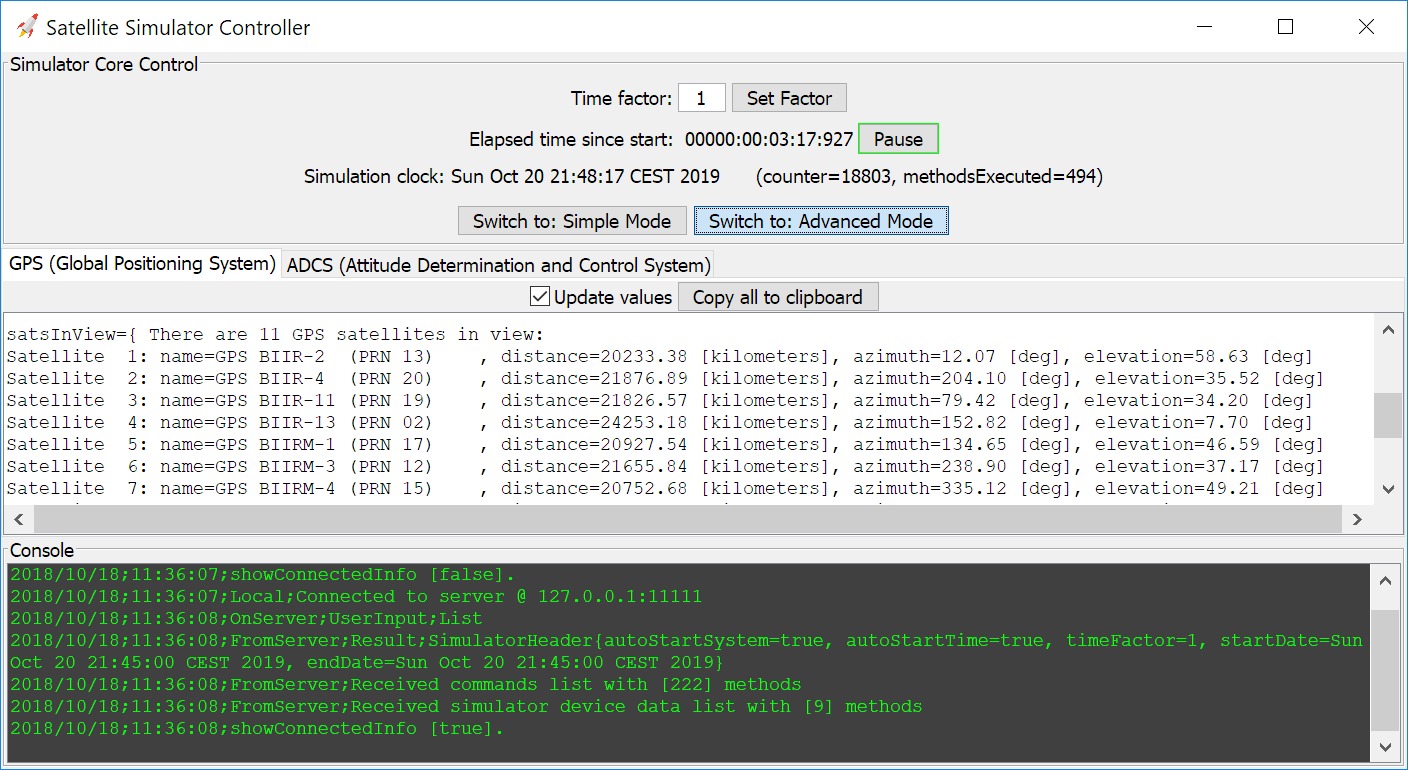 In the Satellite Simulator Controller, we can go to the GPS tab and visualize the data of the GPS satellites in view. These are the satellites from the GPS constellation that are flying above our satellite and we can see their respective name, their PRN (pseudorandom noise number), the distance to our satellite, and also the azimuth and elevation.


5. Go back to the “GPS Tracker” instrument panel, and then to the “Multimedia Inbox”. Click on the “Satellites Plot”: 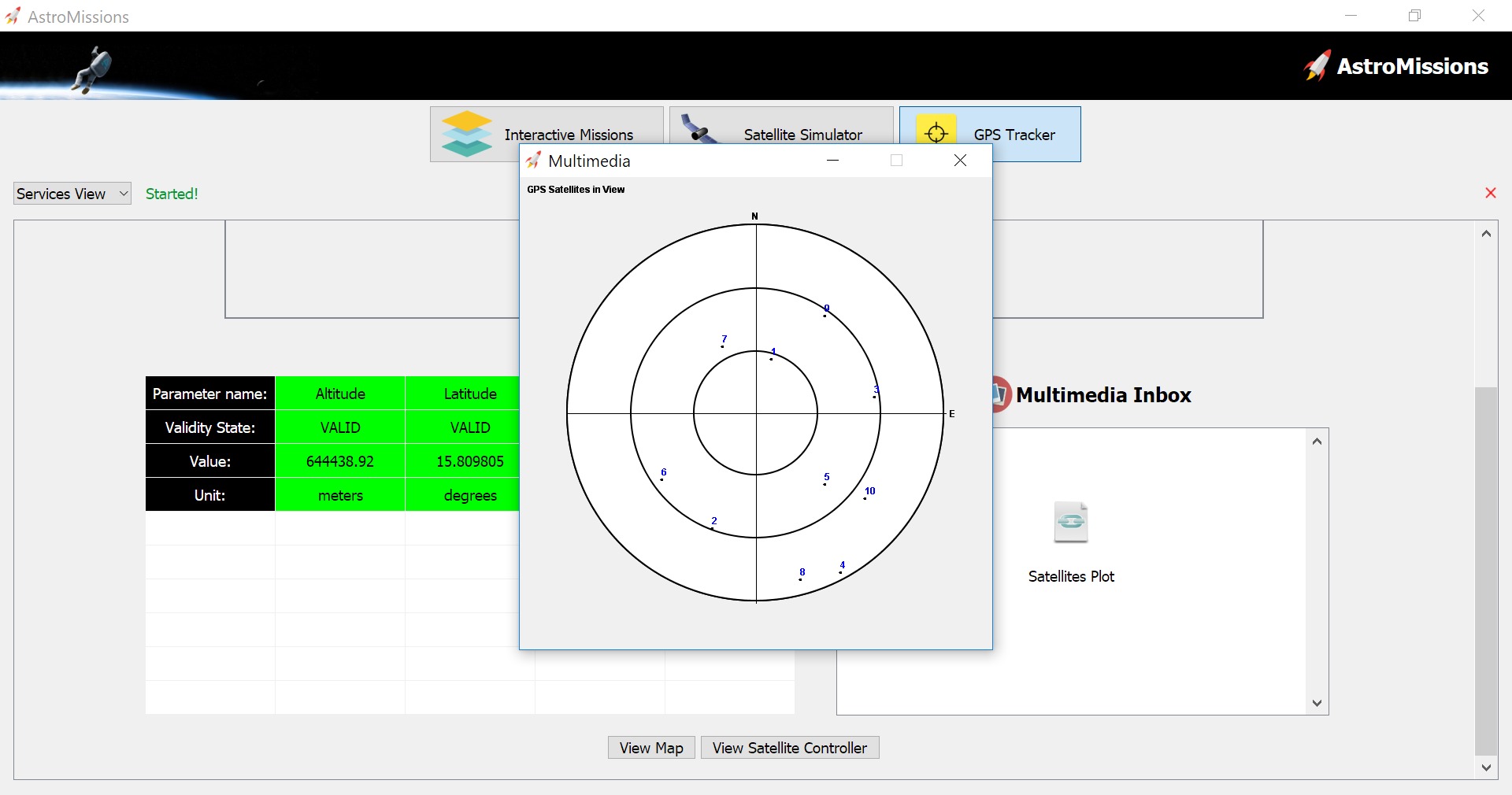 The window will display a plot with the GPS satellites. The dots mark their position and the number above identifies them with the same value as presented in the Satellite Simulator Controller. The position of the satellites will change as time evolves.


6. Put the Satellite Simulator Controller window next to the Multimedia window that is displaying the GPS satellites in view: 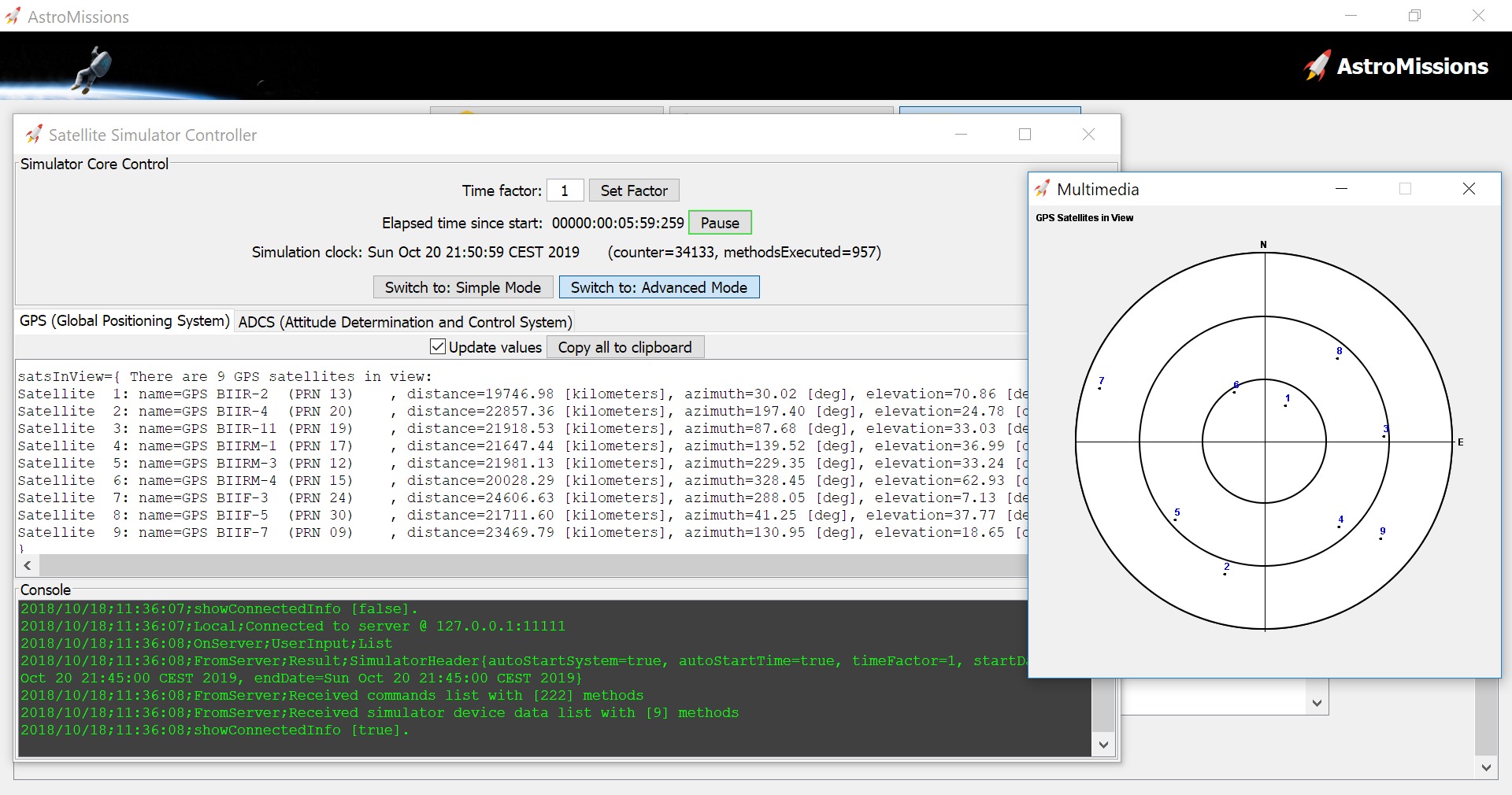 7. Change the Time Factor to 10 in and press the button “Set Factor” in order to increase the speed of the simulation


Get inspired with a message for humanity by Carl Sagan: