How much junk is in space? Learn more about space debris and how they endanger space flight today and also in the future.

Discover what happens to the solar panels of your satellite simulator when they get hit by space debris.

The first artificial satellite in space flying around the Earth was Sputnik 1, launched by the Soviet Union in 1957. Sputnik 1 was very simple, it included 4 antennas and a radio transmitter inside a metal sphere with 58 centimeters of diameter. 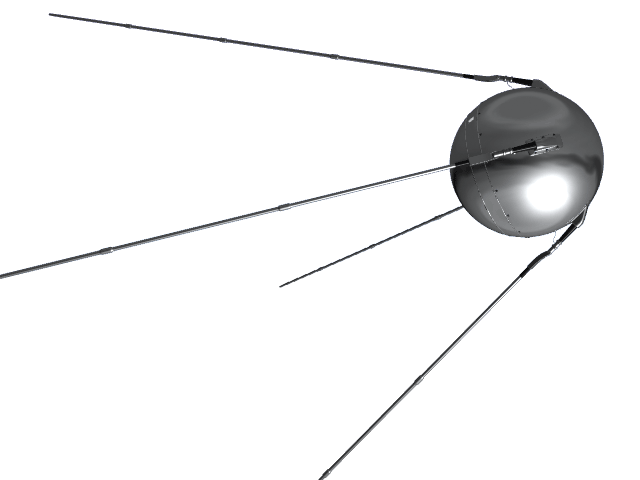 Sputnik's radio transmitter was broadcasting pulses that could be heard by radio operators around the world. This is known as the “Sputnik moment” that triggered the space race. Since then, many other satellites have been launched in space by nations and private companies.

During orbit insertion of a satellite, sometimes there are small fragments of the rocket launcher that are released and stay trapped in orbit for a very long time. In addition to that, satellites don’t operate forever and eventually, they complete their mission successfully or they have some malfunction in the system which might make them inoperable. The collection of all non-functional, human-made objects in Earth orbit are known as space debris. Now, you might be wondering:

How many objects are there in Earth’s orbit?

The number of objects in space keeps increasing and therefore the probability of collisions among them also increases. Sometimes, satellites need to execute collision avoidance maneuvers in order to prevent impacts from debris. For example, in 2009 two satellites collided at a speed of 42'120 km/h and generated thousands of pieces of debris. This contributed to a substantial increase of man-made objects in space.

A very controversial anti-satellite missile test was done by China in 2007 which generated thousands of space debris composed of fragments from Fengyun-1C, the destroyed weather satellite. The increase of space debris is a serious problem! The debris generated from a collision can hit other objects in space and generate even more debris. This cascading effect is known as the Kessler syndrome and it was used in the story plot of the movie “Gravity”.

In order to track space debris, radar and optical detectors are used to track debris as small as 1 cm however many of them remain unobserved. Space agencies maintain catalogs of known orbital objects that are collected from multiple sources such as the ESA Space Debris Telescope, TIRA, the Goldstone, Haystack, EISCAT radars or the Cobra Dane phased array radar.

Since the past decade, there has been a significant increase in the number of launches. Many of these are small satellites that follow the “CubeSat” standard developed by California Polytechnic State University and Stanford University which consists of any number of 10 cm x 10 cm x 10 cm units. These satellites are about the size of a shoe box that are usually much cheaper to launch than bigger satellites. Many universities use them for educational purposes.


Space debris threaten many functional satellites around the Earth. For that reason, it is important to prevent further increase of debris in space. One technique employed by missions is to do self-removal. Satellites in Low Earth Orbit (LEO) can decrease their altitude and burn up during reentry. Satellites in Geostationary Earth Orbit (GEO) are too high and it would be necessary a lot of fuel to bring them back to earth’s atmosphere therefore they are transferred to a graveyard orbit that is a few kilometers higher than GEO.


A photovoltaic solar panel can absorb sunlight as a source of energy to generate electricity. Solar panels are very common in satellites because they are able to generate electric energy to power the satellite without the need for additional power sources. The solar panels are composed of multiple solar cells made of semiconductor material which is capable of creating an electric potential when exposed to sunlight. Silicon used to be the most popular choice of semiconductor but it is being replaced by gallium arsenide (GaAs) which is capable of reaching higher power levels. 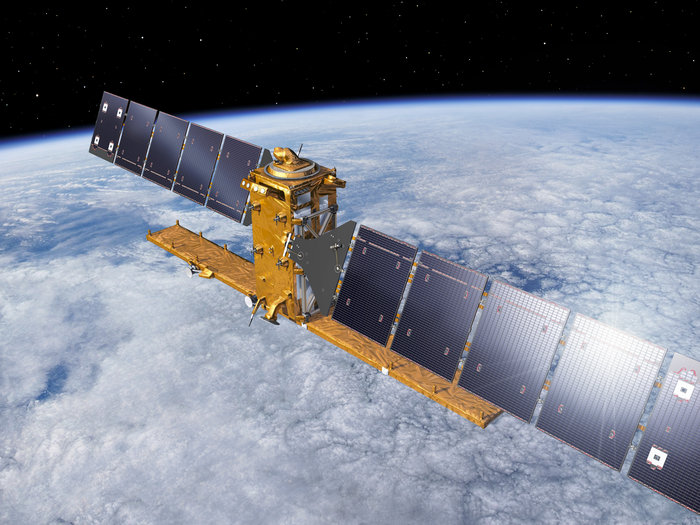 With so many debris around the Earth, it is inevitable that one of them will eventually collide with a functional satellite, in fact, this has already happened before. For example, the Sentinel-1A from the European Space Agency (in the picture above) was hit by a millimeter-size particle on its solar panel on the 23rd of August 2016. [1]

What happens if space debris hit a solar panel?

This instrument has a similar scenario where the satellite is on a collision course with a small particle. We will check some of the solar panel parameters before and after the collision, and also inspect our solar panels visually. Today, collisions do not happen very frequently in space but as the number of debris keeps increasing, these events are expected to occur more often.

Potential collision alerts usually come from institutes like the Joint Space Operations Center (JSpOC) that send “risk of conjunction” warnings which contains information such as the “time of closest approach”, the “miss distance/relative speed”, and also the “closest approach relative position/velocity”. The “potential conjunctions” of a given satellite with a catalogued object is then assessed and the collision risk is determined as a function of different parameters such as the object sizes, the predicted miss distance, the flyby geometry and the orbit uncertainties of the two objects involved. Actions are then taken based on this information in order to mitigate the collision risk.

1. Open the AstroMissions App and go to the “Satellite Simulator” tab. Press “Launch!”:


2. Press the “Solar Panels” instrument icon in order to start it: 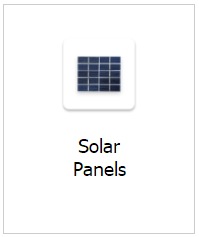 The “Solar Panels” instrument will initialize. The “Console View” will be presented during initialization and it will switch automatically to the “Services View” after initialization.

Attention: you have about 3 minutes before the collision happens! You can check the exact number of seconds on the Parameters Dashboard.


3. Go to the Parameters Dashboard: 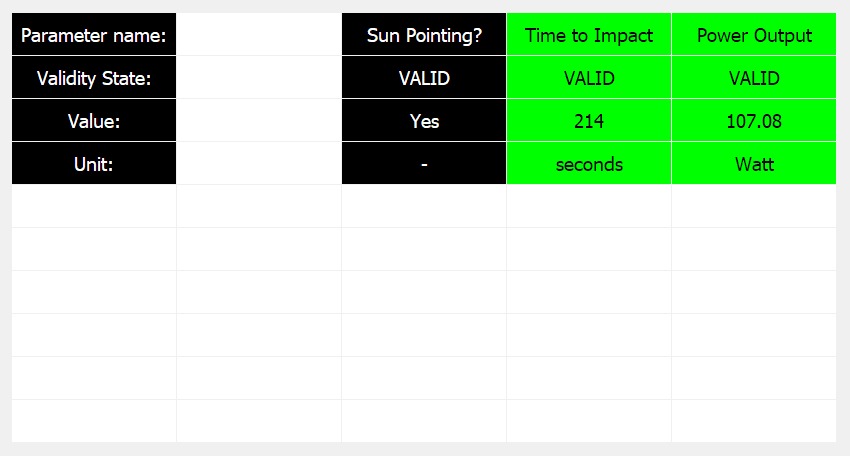 In this panel we have the parameter values of the time left for impact and the current solar panels output. If the time for impact is negative, then it means that the impact has already occurred. If you don’t have a lot of time left, then please go to the Launcher tab and restart the Satellite Simulator by stopping the simulator and launch it again. After, you can start the instrument again and continue to the next step.


Throughout the lifetime of a satellite, it is normal that the solar panels efficiency decreases with time due to degradation of the solar arrays. However, in case of a strike in a solar panel, we might expect to see a significant power drop if the solar panel gets damaged.


5. Check the Parameter Dashboard and wait until the impact happens: 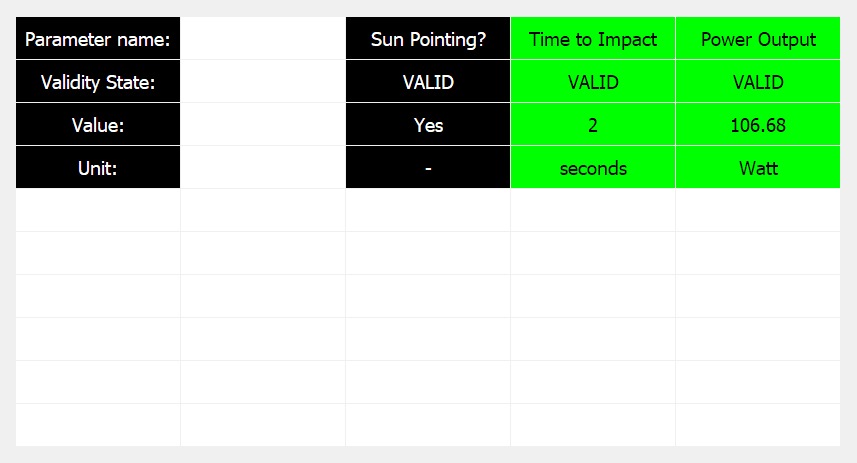 Write down the value of the SolarPanelOutput before the impact and compare it to the value after the impact.

You might be wondering how could we have prevented the collision from happening? The answer is: by executing a collision avoidance maneuver. In order to do that, it is necessary to have a propulsion system but unfortunately, our satellite simulator does not have it.


6. Go to the Actions panel and retake the photographs to the solar panels. Then, go to the Multimedia panel and compare the photos before and after: 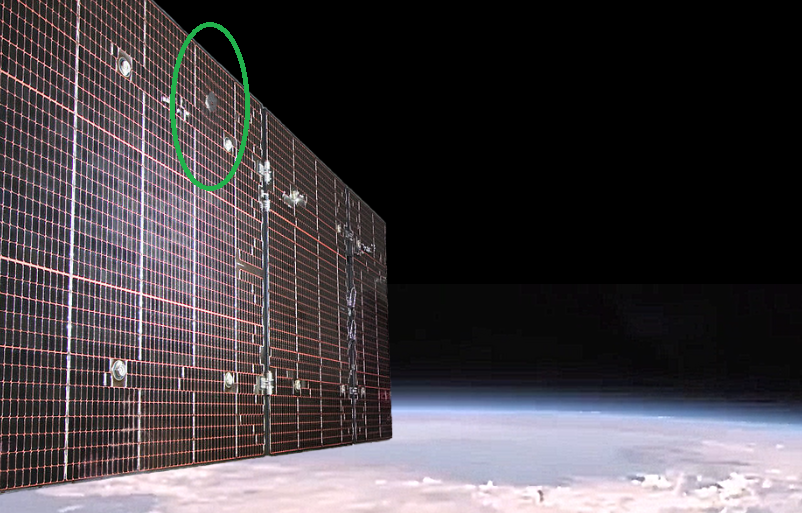 The impact damaged the left solar panel of our satellite! Compare also the value of the solar panel output parameter before and after the impact.

Why don't we see any stars on the image? The reason that the stars do not show up on the image is that the stars are so dim that the camera cannot gather enough of their light in a short exposure. Many cameras automatically adjust the exposure time to try to produce the best image.


Get inspired by "why magnets attract" with Richard Feynman: